Someone left me with a lingering heartache today thanks to a careless comment. I would have liked to turn that hurt into anger, to have used this platform to rail against a thoughtless person. The first draft did exactly that, until I reviewed it and then saw that I’ve made the same sort of mistake.

My girl dog, Jessie, and I, while out on our usual late morning walk, ran into a woman walking with her dog. The dogs exchanged “hellos”, and the woman turned to me.

Woman: <gives me a sympathetic look> “German Shepherds don’t live much longer than that, do they?”

In an instant all of my carefully placed fictions, designed to distract me from Jessie’s aging, crumbled. I spent the next hours of the day clouded by sadness.

In my defense, whenever I have done something similar I have studiously avoided any mention of end of life issues. Usually I will inquire about an older dog’s age, and then comment about how spry and active they appear. I’ve thought I was putting a positive spin on things. Now I think that all I accomplished was what that woman’s comment did today, which was to draw attention to inevitabilities, and temporarily destroy the present moment joy of the caretaker with their dog. After today, I have a much greater appreciation for my fellow dog walkers in my community who don’t know how old Jessie is because they’ve never asked, a strategy I will now emulate.

Back to enjoying every moment spent with Jessie (and Maxx, of course)! 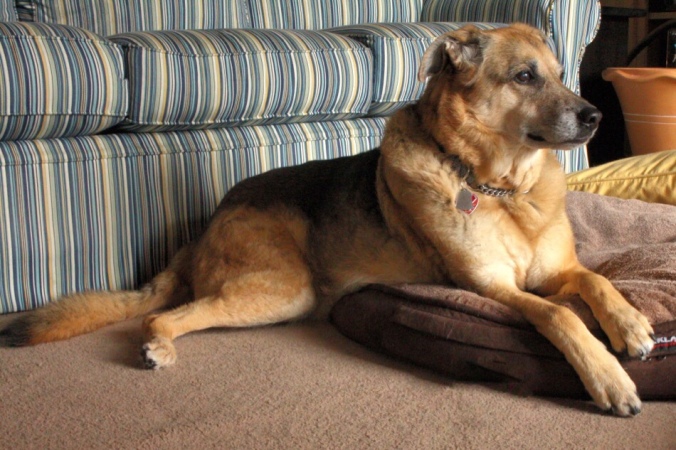 I live at the eastern edge of the North American continent, about one-eighth of a mile from the Atlantic Ocean. I take no pride, and very little pleasure from that fact, but that’s another story for another time. What is notable in the present moment is that my area is recovering from a N’or Easter that has riled up the Big Water. When that happens it sounds as if the busiest airport on the planet is right next door. I can feel it through the sand beneath my feet. While out with the dogs in the pre-dawn darkness, that roar made me feel very small and vulnerable; such a powerful and inhospitable expanse so close by. And then from there my thoughts evolved to take in the unimaginable vastness of the Universe just beyond the thin veneer of atmosphere above me, and I welcomed the inrushing sense of insignificance.

A phone video of Maxx in the darkness this morning with the ocean roar (pitifully rendered by this medium) drowning all other sound.